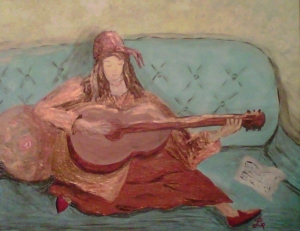 Metaphoric language can be used to create beautiful images and connective thinking.  However, in the cancer community, metaphor often evokes fear and anxiety. Cancer is known as the invader, with whom the individual is at war.  If one persists and the disease relents, they are a survivor, they have won the battle.  But what about those who die from cancer, have they lost? The language that we use with cancer patients is important and conveys our understanding of their experience, or it can overwhelm and frighten them.  Individuals with cancer themselves often use war or invasion metaphors that contribute to the sense of being overtaken by the disease.  Examining the use of metaphor in cancer narratives is helpful for building a greater awareness of the power metaphors have in the experience of cancer.

The word cancer is a metaphor in itself and is usually traced to Hippocrates, who in the fifth century BC likened the long bulky veins radiating from lumps in the breast to crabs (carcinoma in Greek, cancer in Latin). The term is widely used, translated to different languages emphasizing that cancers, like crabs, creep along and eat away the flesh and the lives of patients (Skott, 2002, p. 231)

In her article, Expressive Metaphors in Cancer Narratives, Carola Skott, Ph.D. presents us with this history of the term cancer. It is clear that from the origination of the term, cancer was viewed as a foreign body attacking tissues and devouring healthy cells.  When the words that we use to represent this illness convey invasion in the body, it is evident why we feel fearful and anxious when cancer is discussed.

Skoff conducted interviews with cancer patients focused on illness narratives, particularly meaning of cancer metaphors.  Patients often referred to their cancers as “the enemy (Skoff, 2002, p.232),” “a growing moving organism” (Skoff, 2002, p.232), an external threat the body could not defend against, being condemned to death, a loss of control or sense of identity, and foreign body “eating” the individual (Skoff, 2002). What Skoff found was that there was a struggle within the individual to remain hopeful when facing illness. Cancer patients reflected upon feeling a loss of control over their bodies. Patients also felt some personal responsibility for being ill, as if they had not fought hard enough or lived in a way that left them vulnerable to cancer (Skoff, 2002).

It is the concept of needing to “survive” cancer that blogger BC Becky, (which stands for breast cancer Becky), discusses in her writings about her experience with breast cancer. In her post, Not fighting a battle – the closure to the narrative is death itself, Becky challenges the use of fighting a battle with cancer language.  She says:

I feel that the war metaphor no longer works.  It doesn’t work for my friends who are metastatic and will die from this disease.  But it also doesn’t work for me.  With survivorship, one of the things I am coming to terms with is that there is no sense of closure.  There is no clear ending. The war metaphor no longer works for me. I’m living with all the side effects of treatment, and with all the fears of the cancer coming back, or another cancer happening.  I do not expect that there will ever be that pretty closure that narratives seek. But I also think that is part of the point (BC Becky, 5/21/2017)

Here the blogger, who is living with cancer, challenges us to reconsider terms such as battle, fight, and survivor, as these create a sense of personal failure for those who die from the disease.  She instead asks us to consider that there is no closure for cancer patients, there is no “after” where the side effects of treatment or fear of recurrence do not exist.  “The only ending or sense of closure is death” (BC Becky, 5/21/2017). Though she acknowledges war metaphors do work for others, who may find it gives them closure. But she expresses that the only way we ever know we survived cancer is if we die from some other illness, which is quite different than the survivor metaphor we are often presented with.

Ultimately, Skoff concludes that patients tell their stories and use metaphor as a way to:

Find consolation and to overcome solitude by articulating experience, being listened to, and, in this way, recreating and strengthening identity (Skoff, 2002, p.234)

Metaphor itself is a means of story telling and sometimes the narrative isn’t pretty, in fact it is scary.  It is important that we allow patients to find the language and metaphors that work for them, and that we discuss and listen to their conceptualization of their illness. A colon cancer patient that I have worked with said, “I guess we are still here to tell our stories, that is how I see it.”  For him, telling his story to others was part of how he processed and managed his experience.  Being more clear and intentional in the ways we express ourselves is important, particularly around illness.  Most important is listening to patients and allowing them the control of the metaphors and language they want to use surrounding their illness.

One thought on “Metaphor and Cancer Narratives”

Goran's layout adjusts itself depending on the device you are using. This means your site will look good not only on laptop browsers, but also on devices with smaller screens, such as the iPad and the iPhone.